What to know before you buy flood insurance.

It may sound simple, but from an insurance prespective, flooding isnt as clear cut as you might think.

Many of think they know and dont worry because their proprerty isn’t near the ocean or a river.  Or perhaps, someone might think they experienced a flood, only to find out the water damage that occured, isnt covered under thier insurance policy.

That’s important to understand because the most commonly issued homeowners policies specifically exclude certain types of water damage, including flood. Here is what the standard insurance form states: 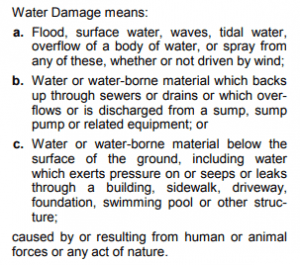 So, while your homeowners policy may exclude flood, even though you’ve purchased a flood policy, you still have to meet the FEMA definition to get coverage!  Plus, while many people rely on the government published flood maps, many of the ones available today are either outdated or doesn’t take into account the impact of climate change.

The non-profit First Street Foundation has now made it possible for you to access information to help you assess your property with respect to flood severity. Called, Flood IQ, the tool visualizes your risk of sea level rise flooding today and up to 15 years in the future.

The First Street Foundation is a New York-based non profit partnering with an international team of scientists who are working to calculate the past, current and future flood risk, of every property in America.  Flood Factor makes it even easier to find your risk of flooding with new and improved flood-predicting technology. Find past floods, current risks, and future projections based on peer-reviewed research from the world’s leading flood modelers.

In the aftermath of a hurricane, you and your business will likely have to deal with water damage, flooding, and damaged utilities.  Download our hurricane recovery checklist to take steps to keep your business and customers safe after a hurricane passes.